The driving force behind the building of the present magnificent church in 1832 was the Parish Priest of the time, Very Rev. Justin Foley McNamara. The land was donated by the Kearney family of Garrettstown House, and £300 of the cost was donated by the Protestant community around Kinsale. The final debt was cleared by the collection taken during the visit of Father Theobald Mathew, the Apostle of Temperance ten years later.

It is thought that the style of the Church was influenced by many of the churches visited in Greece and Rome during his European travels. Fr. Justin Foley McNamara died on his way to Rome in 1846; it is believed that he was a candidate for the vacant diocese of Cork. 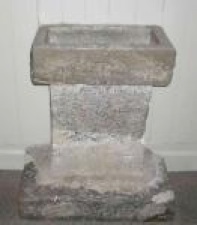 The Architectural Survey of Ireland describes the church as:

During 2001, an architectural examination of the church showed several areas of concern. Water had seeped in through the bell tower and other areas had caused serious damage. There was also dry rot infestation.

Phase One of this work dealt with the water damage and the repair of the roof trusses. The second part included the installation of new heating, electrical and sanitary systems, together with the treatment of the wooden floor boards for dry rot. A new sound system was installed and finally the church was redecorated. The baptismal font, the ambo and the presidential chair were also replaced at this time.  The church was rededicated in March 2004.

The total cost of this major work was €1.7M, and thanks to the generosity of the parishioners this debt was cleared by December 2012.

On the western wall there is a striking image of Rev. Justin Foley McNamara (1789-1845) by John Hogan (1800-1858), one of Ireland’s best known sculptors. They were close friends, frequently travelling on the continent together. His proposed elevation to Bishop of the diocese of Cork is cleverly immortalised in the sculptor by John Hogan, in the form of an angel coming with a mitre. It is believed that the face was carved using the death mask of the late parish priest.

The organ is possibly the oldest pipe organ in Ireland. It is a fine example of the workmanship of Hugh Russell of London built in 1809. It has been part of the musical life of the church for close on 200 years. Neiland and Associates of Wexford carried out a detailed survey of the organ. In their report they describe it as an instrument of very valuable historic significance and their restoration has since been completed.

Another feature of the church is the Trypitch behind the altar. This Trypitch was restored to its original form during the renovations. Prior to renovation, two of the pictures had been removed and were hanging on either side of the organ. Both pictures had been badly damaged by dampness and the main one of the crucifixion was also in a poor condition. All three were restored by a professional art restorer who is a parishioner, and the Trypitch is now as it was in the original design of the church. 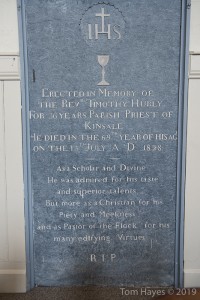 This monument was erected in memory of Father Timothy Hurley, PP Kinsale 1792 – 1829. He erected the earlier thatched church of the parish. (Click to view) 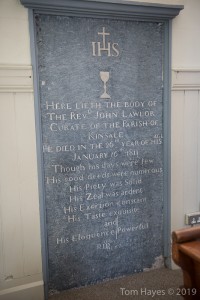